Do not allow copy paste

'Kailash mountain is astonishing. The resting place of Lord Shiva and supposedly cannot be climbed' I told Suchita my wife while watching a National Geographic series on Mount Kailash.

'It is believed that Lord Shiva and Parvati' still reside there.'

Suchita had come to know my sudden bursts of history and mythology sessions and nodded along.

'Hey Suchita do you know that there is actually a very old temple of Shiva near Pune. It is believed that Parvati had danced for Lord Shiva here and from where they had gone to Mt. Kailasha and got married'

'What ?!?!?' Suchita said a bit astonished. 'I did not know Pune was part of any folklore related to gods'

'Well, there are many stories associated with Pune' I continued 'This happens to be one of them'

'Actually... the Bhuleshwar Temple is supposed to be a photographers delight !!!' I continued. 'If you want we can plan one visit today'

I turned around to see Suchita already packing her camera and travel bag.

Bhuleshwar is a Hindu temple of Shiva, situated around 45 kilometres from Pune and 10 km from Pune Solapur highway from Yawat. The temple is situated on a hill and was built in the 13th century.

The temple is unique as its architecture is Islamic from outside and appears more as a mosque than a temple due to its resemblance of circular tomb and minarets. The reason for this unique design is said to be done to protect the temple from being destroyed by invaders. There are classical carvings on the walls. This is what Wikipedia tells us.

After an hour and half of drive, we took a right towards Yawat. The roads had been good all along and the drive pleasing. The temple becomes visible soon after you leave the highway.

This temple used to sit at top of a fort and the walls of the fort as still visible at places.

The road leads right upto the temple. There are few turns and bends along the way all through the incline. 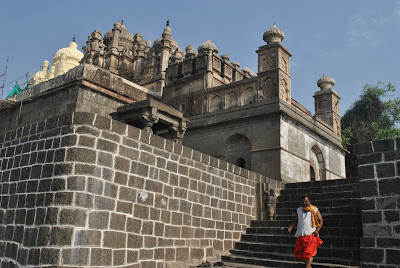 Though there are no guides at this fantastic temple, the guard and the priest do offer useful information if free.

We were lucky to have been guided by both.

Legend has it that the temple was built by Panch Pandava. Consturction of the Bhuleshwar temple commenced during the period of 1230 AD during Yadava Rulers. The temple is constructed using Black Basalt rock not found in this region.

The fort on which the temple is situated is called as Daulatmangal fort which was built the fort to keep a watch on the Pune city.

From outside the temple has been designed like a mosque than a temple due to its resemblance to Islamic architecture like circular tomb and minarets.The guard told us that this was done to avoid invaders from destroying the temple.

Inside the temple is a treasure trove of exquisite carvings, stories of Ramayana, beautiful pillars, a Nandi and lots of history.

The temple is dedicated to Lord Shiva and is accompanied by idols of Godess Parvati, Lord Ganesha,Nandi,Kali,Shakti,Vishnu,Laxmi,Saraswati and many other Hindu Gods and Godesses.

One is one of the very few temples in the world to have a status of Female Ganesha - Vinayaki. 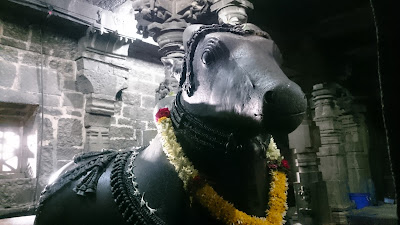 Statue of Nandi inside the temple 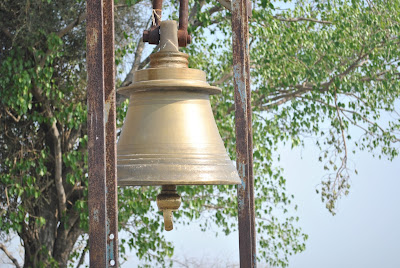 A bell outside the temple 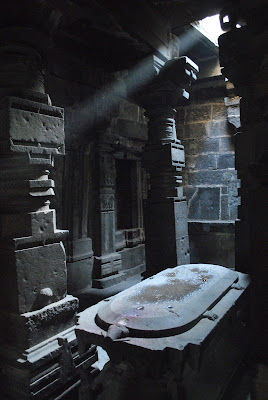 There are a lot of interesting carvings inside this temple and a shutterbugs paradise. The Shivling is itself unique and opens up from top. One can place offerings inside it. The temple priest told us that there have been cases of offerings disappearing for very few devout followers.


It was late in the afternoon when we commenced our journey back to home. Bhuleshwar is a very interesting place to visit for believer and non-believer alike.

Thanks  for reading and happy travelling :)
* We  would love it if you want to use our images for ethical and useful purpose. Please mail us on sagarpradhan001@gmail.com or suchitab85@gmail.com for the high resolution file.